skip to main | skip to sidebar

The end of marching band season

It's been a rough marching band season. We had a ton of freshman this year and it takes a while to get the hang of playing and marching at the same time. We were several weeks into the season before they even finished their show. The kids worked really hard though and last weekend had the performance of the season at the Regional competition which allowed them to go to the Semi State competition yesterday. After a 4 hour bus ride though, the kids were tired and grouchy and not too excited about marching. I chaperoned the bus yesterday and I know I was grouchy and tired so I can understand how the kids felt. They were competing against some really good bands from the northern part of the state and we knew going in that it would take some sort of miracle for us to go to state. It wasn't the performance they had hoped for, but they can be proud of the fact that they made it to semi state two years in a row. 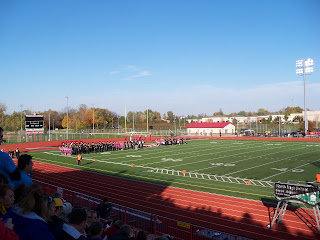 The Green Brigade waits to take the field. 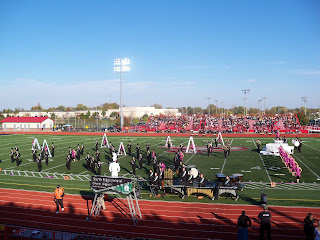 Performing their show "Dare to Dream" 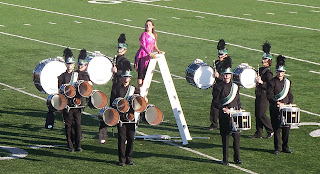 The 2011 Drumline. My son is playing the smallest bass drum on the far right.

Regardless of the score, I'm terribly proud of this hardworking group of kids. They practice a minimum of 10 hours each week and their Saturdays are usually 12-14 hour days. The usually have to report by 7:30am, they practice for 2-3 hours, eat lunch and then spend the rest of the day marching at 2 contests with long bus rides in between. They finally pull back into the parking lot around 10pm where they drag themselves off the buses and into waiting cars. And then, bless their hearts, they do it all again the following week. Gotta love the band kids! They rock!! Gee, now they have a couple of weeks before jazz band, pep band and winter drumline begin...
on Sunday, October 23, 2011